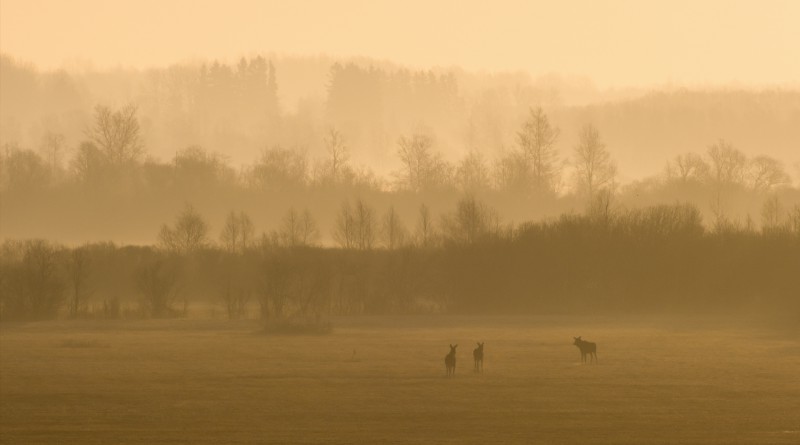 In the beginning of April 2015 me and Joosep finally started filming our new film. Since we don’t have an official title yet I’ll just call it the “ultimate moose film” for now. This is by far the most serious and biggest production any of us have ever produced before. It’s supposed to be an approximately one hour long wildlife film about moose in Estonia. Our plan is to film it for the coming 2 years and deliver it in autumn 2017.

At the moment we have participated in a film contest in Estonia. Of over 100 participants only now 3 remain and we are one of the finalist! All three finalist got a small budget for making a trailer and writing the script. The budget is low and the time is very limited. The finished trailer has to be delivered already in the end of May so we had to jump start the project by going straight out on the field filming. Now we’ve been here for over a month and we can already slowly see the trailer forming itself in our minds.

Once again I realized how much more interesting I personally think that cinematography is than photography. In the beginning of April when we saw our first moose roaming around the area I was filming a lot and almost everything that moved to get an idea of what kind of things I could expect to see in the near future. This resulted in a lot of different moose standing and almost paralyzingly looking straight into the camera. Usually after the tension was over the moose continued with what they were doing before they got interrupted by me. Still a certain kind of tense mood was hanging in the air and I saw the animals checking frequently on me.

Still I believe that I would have been able to shoot a couple of decent still photos of moose in sunset, sunrise, sun, rain, storm, and so on. But for cinematography this is not nearly enough. I would say that for cinematographers it’s not about the “perfect shot”, it’s more about the “perfect scene”. Being able to show something in an interesting way you must be able to edit the footage to scenes. For editing you need different framing sizes, walk troughs, walk ins and walk outs, dynamic behavior and similar light as in the previous shot. In wildlife film making, none of these can be ordered or directed.
This means that the only way to get the “perfect scene” or the “perfect shot” is to spend time. A lot of time. Where’s the perfect scene most likely will take much longer to get than the perfect shot.
It’s not the longer time spent in the field that I like but more that there’s a very good reason why I should spend it.Let’s say I have all the shots for a nice scene except for one. The feeling of incompleteness is so disturbing that I will put double the effort to get that last specific shot. And while I’m trying to get that shot, I will most certainly encounter something new which I would not otherwise had.

It’s a bit like playing with legos where someone has hidden all the pieces and you first have to find them before puzzling them together.
To make a film about a specific specie takes a lot of time and effort. It’s clearly not enough to have that specie in the frame doing something. Instead it’s deeply about presenting the character through it’s behavior. Once the behavior is captured, the audience will then more easily relate to the animal and hopefully feel some empathy for it.
I would say that behavior is really the most interesting thing for an audience to see. Just think about all the cat videos the internet is full of, they are always doing something funny, scary, interesting and so on. This is behavior. No one would like to see a 1 minute clip of a cat eating dry food from it’s jar if there wasn’t something special going on.

The first week started with a bad fever and flue. Our heating system didn’t work either and we were sleeping in an old Swedish caravan. It was minus degrees in the mornings and rain in the day. Perfect start on any project don’t you think? However we survived, even though some times it was less than pleasant.

Our plan in the beginning of a project, as it usually is, was to start scouting the huge marshlands. One nice feature this location has is watchtowers. They are former firefighters watchtowers that has been rebuilt for birdwatchers and ornithologists. These are very handy for covering a big area just with binoculars. Already on the first evening when we climbed the tower we saw 3 moose. It was two cow’s and one yearling. The cow’s where sleeping on higher ground while the yearling was playing around in the water.
The whole area is flooded in the beginning of the spring. The vegetation is mostly huge willow bushes which makes nice looking islands in the flat landscape.

After a couple of days tower watching and location scouting we started to move more around on the marshes. The only way for us to move at that moment was by feet with long rubber boots and all the equipment on our backs. Knee high water, soft bottom and old grassy vegetation that stick to your boots makes it hard to move fast. Luckily the weather was cold and windy so while moving we felt at least comfortably warm.

We realized soon that some places were too deep for rubber boots. This we fixed a couple of days later by lending one local farmers boat with a small 5hp 4-stroke engine. With this we could easily access even the most remote areas and rivers. 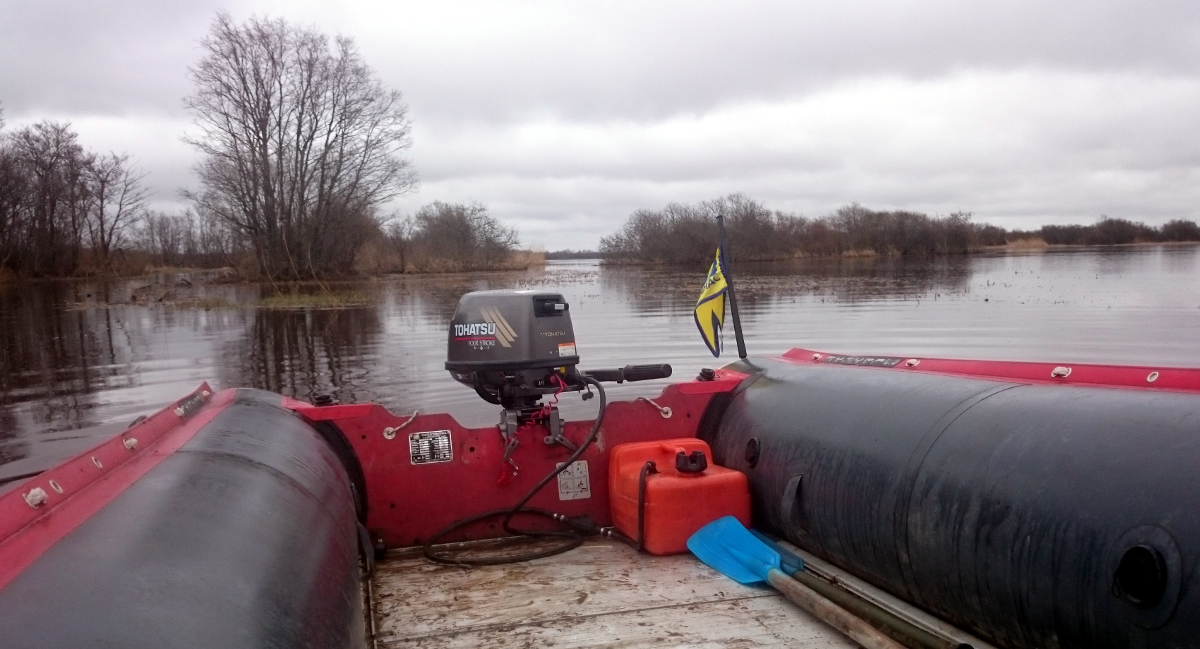 While scouting with the boat we saw some new species for the year. Some more interesting of them were a beaver by it’s nest and a kingfisher. Moose we saw around 6 from the boat. It seems that they like the riverbanks. They are a bit dryer higher ground areas with both good cover from predators but good visibility from the moose point of view. We have found many moose sleeping seamlessly without a single worry around these banks.
Since the ice just recently melted from the marshlands, the moose are first now arriving here. They are behaving calmly and it seems that they spend most of their day eating or sleeping.

Now we are waiting for the action to present itself. The moose cow will soon give birth to her new young ones and thus will abandon her old calves. This is a very dramatic event which should start unfolding next week. and continue until May.
The marshlands is as well one of Europe’s most important stopover places for migrating birds but the migration still seems to be quite faint at the moment.

Let’s hope the weather will start warming up soon…