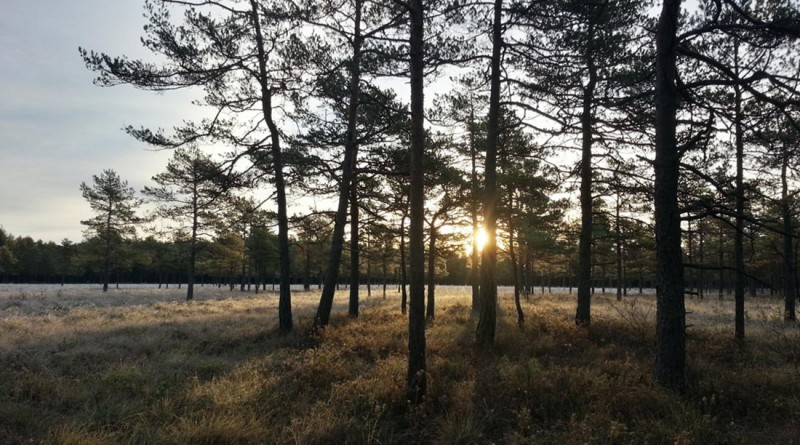 A new project has started. It’s again together with my good friend and collegue Joosep Matjus. We have been asked to do a 14 days filming of moose on bogs. It will be made for a wildlife cinema movie, produced by the german company Nautilus film and directed by Jan Haft. This is an extremly good and rare chance to do something more international than the Finland-Estonia axis. Moose are interesting and beautiful animals and can be found almost everywhere in both Finland and Estonia. The funny thing is that you happen to see moose quite often, but when you are looking for them, they can’t bee found anywhere. If you pay attention while driving your car on other things than the road, you can quite often spot them on fields by the highways, even close to big towns. However, the most common and usual place to find a moose is at the super markets meat division. 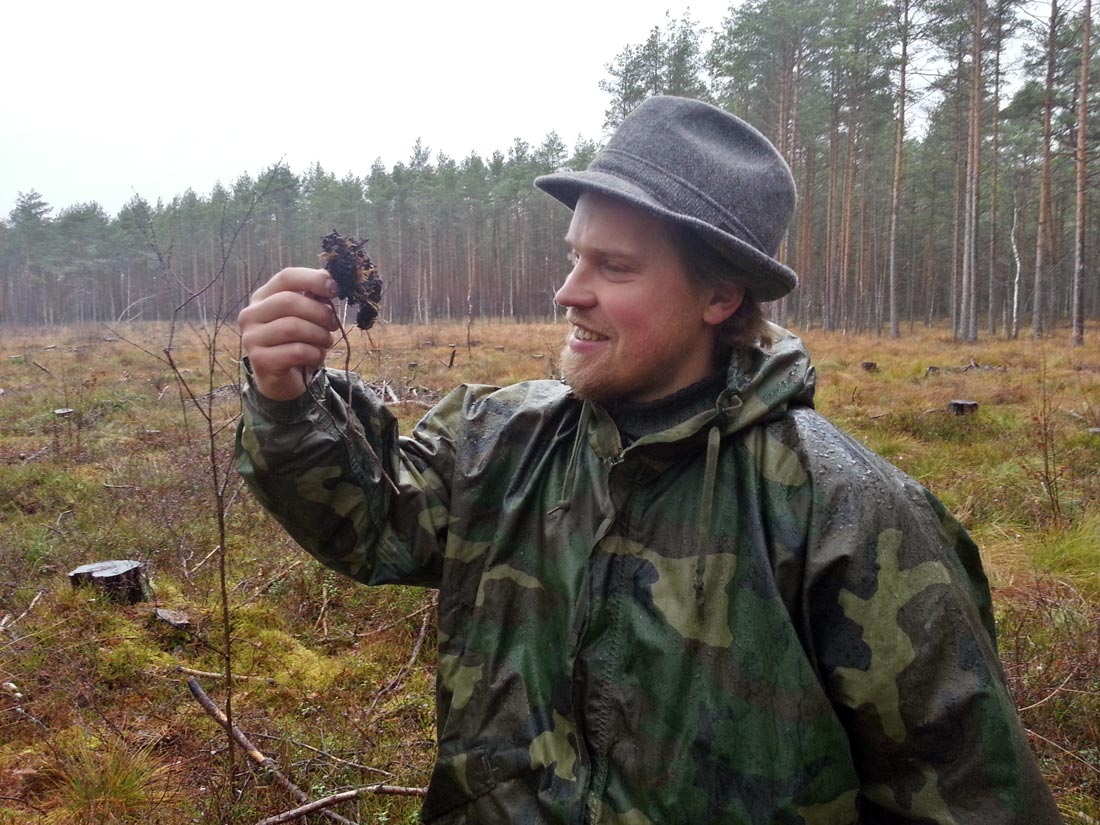 At this time of the year the forests are full of people. Late berry pickers and mushroom gatherers but unfourtunately for the moose, it’s the prime time of moose hunting as well.
This is one of the biggest reasons why we will film in Estonia rather than in Finland. It’s not because estonians don’t pick berrys/mushrooms or hunt. It’s simply just because the moose per human ratio in Estonia is higher than in at least the southern parts of Finland. Joosep is as well a moose expert and knows quite a bit on how, when and where they are moving in Estonia. However finding moose on bogs is a new thing for him as well. 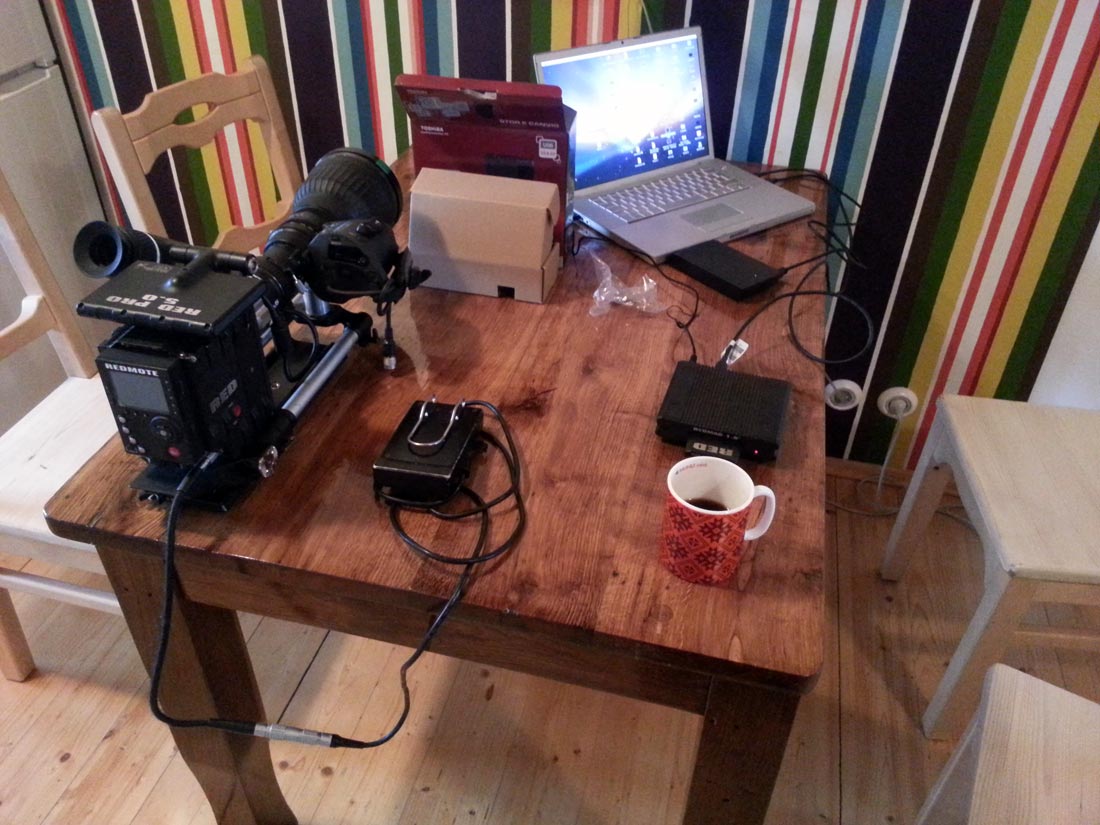 I went over on friday with this already too familiar ferry and arrived to Haapsalu at sunset. Haapsalu is where we will keep our base, a place to charge batteries and transfer footage at.

After an evening of planning together with joosep we headed out to the big forests of Estonia before sunrise.  I always get suprised when moving around in this countrys uninhabitated areas. This time we had barely stepped out of the car when a wild boar came walking down a path just 10m from us. It stopped when it heard us but didn’t understand that we are humans and a potential danger to it before it catched our scent. When that happend it just turned around and bolted like a flash through the forest in the opposite direction.

Wild wildboars are not common in Finland. Actually I’ve never seen one outside the zoo over there, but here they are everywhere, at least based on their tracks. 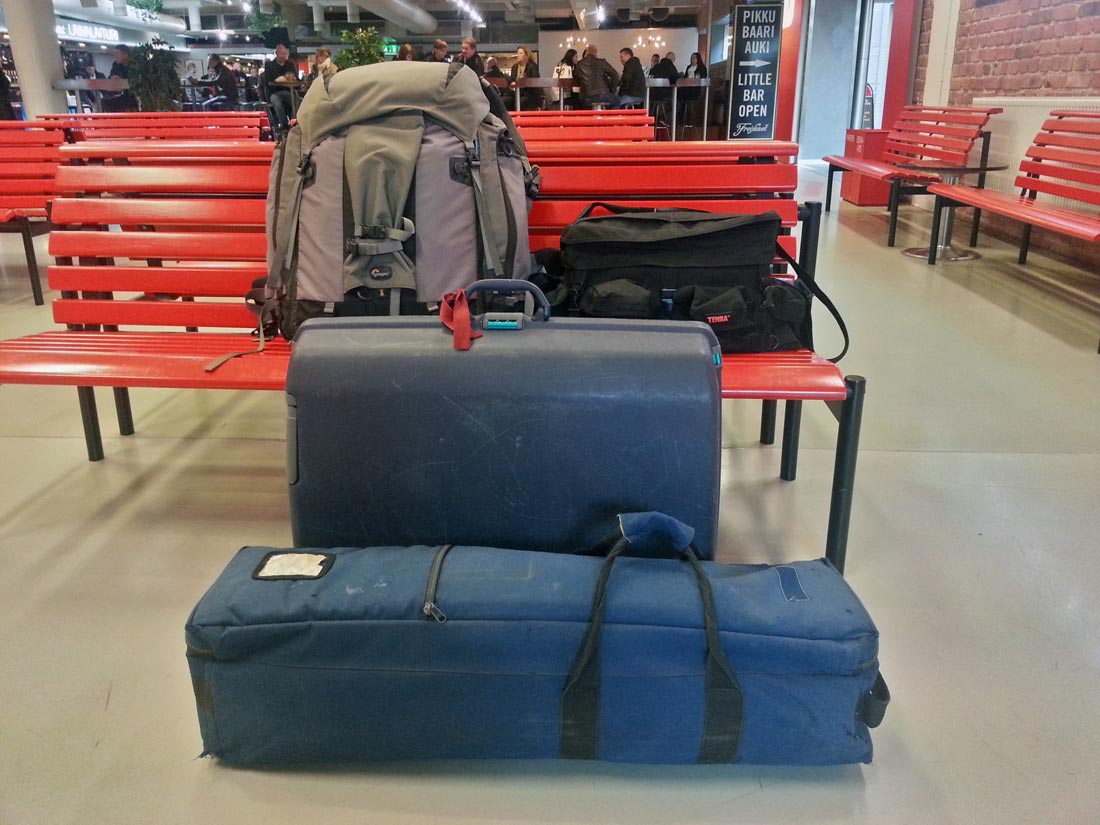 We continued our scouting. Scouting is an important procedur when you are searching for specific animals at new places. One of the most important things to think about when scouting is mobility. You might easily have to walk over 10km at bogs, swamps, uphill or thick forests and so on.
That’s why it’s no point in carrying all the equipment with us. The equipment we use on this project are 2 cameras for filming, the Sony EX3 and the RED epic + lenses for both, heavy duty tripods for working with super tele lenses and 2 still cameras for timelapse with all their accessories including lenses and motion controlling equipment as sliders and pan heads.
I don’t even want to know what all this weights and when you divide it on us both it’s totally too much for an “easy walking in the forest”.

We made the decission to take only the RED, lens and tripod + a still camera with pan head and tripod. 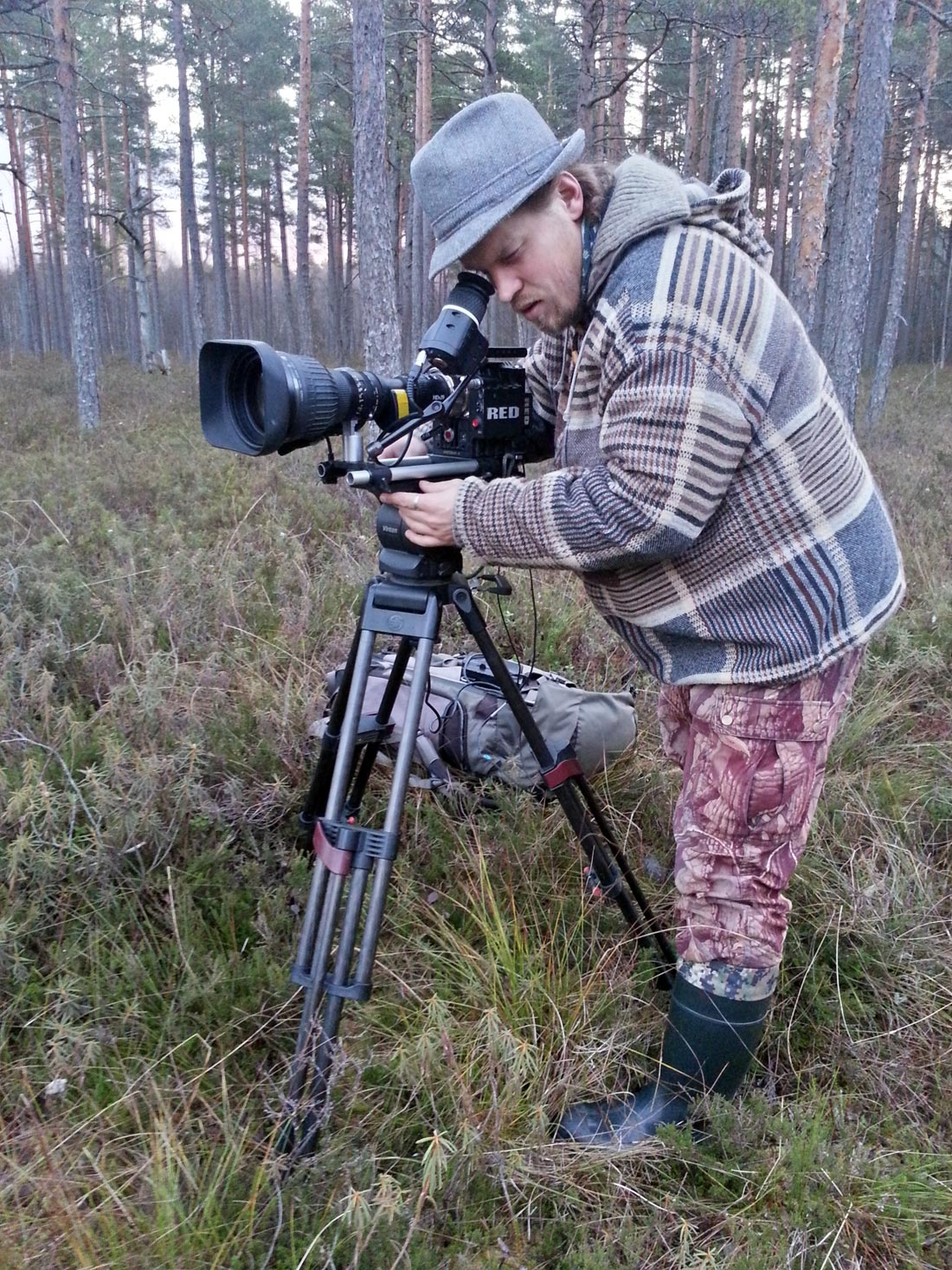 The sun had barely rised when we stopped down for the first time. Scouting is walking around looking for signs of the specific species but as much as it is walking it’s waiting as well. When we find a promising spot with good visibility we put up and rig our equipment and wait for a couple of hours to se if anyone passes by. If something will be spotted we memorize the place and come back later with more equipment but for the meantime the scouting will continue.
This is maybe not the only way to work but at least one of the more certain ways to cover a big areas and find the animal you need. It takes time and the equipment gets heavier for every hour you walk. And when the sun sets and the day ends, so will the scouting. Now is the time for planning for the next days shoots.

After sitting in the first but faint sunlight of the day we spotted this projects first moose at a potential location. It was on a bog, the more dryer one, the one with soft wet vegetation but no open lakes. Joosep started recording while i shot some stills with my phone through an old russian binocular due only one camera capable of filming. 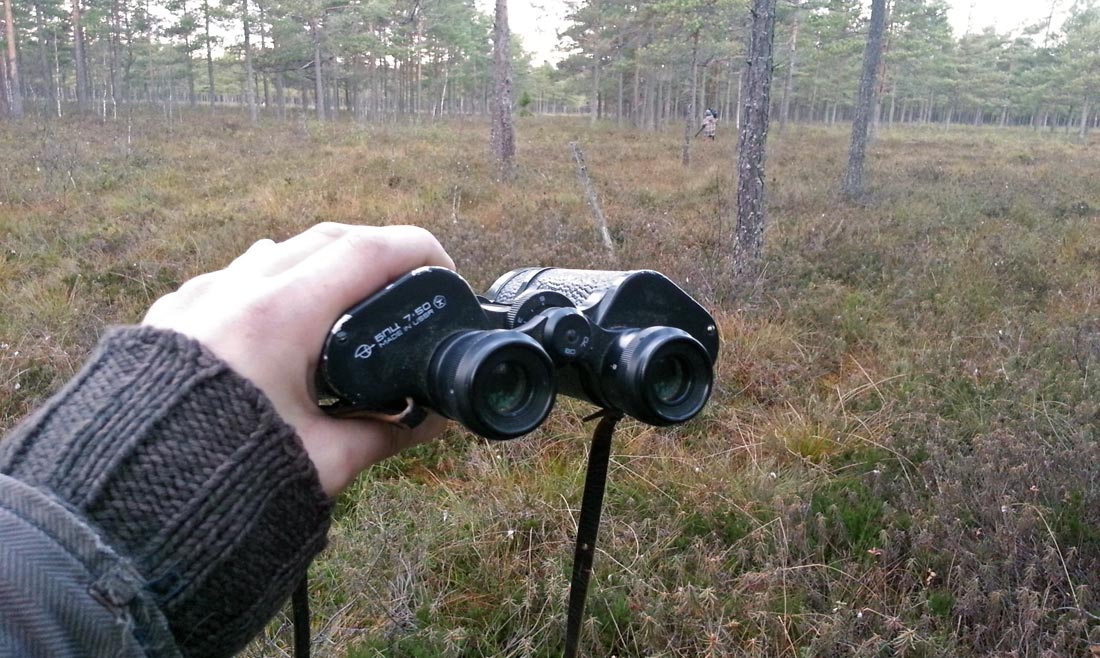 It’s two young bulls. They walked care-freely and slowly through the forest, sometimes playing which each other. They were boxing their heads together, as if learning how to fight the old bulls of the forest and even tried to mate with each other without success.

After showing us the secrets of two young moose bulls lives they headed into a thick forest. As fast and silently as they had appeared they had now disappeared. We sat there waiting for one more hour before we continued.

The RED epic mysterium x version has a native iso of 800 which can be a bit tricky this early in the morning and we had to push it a bit. Lets just hope this is something that can be “cleaned up” a bit in the post. 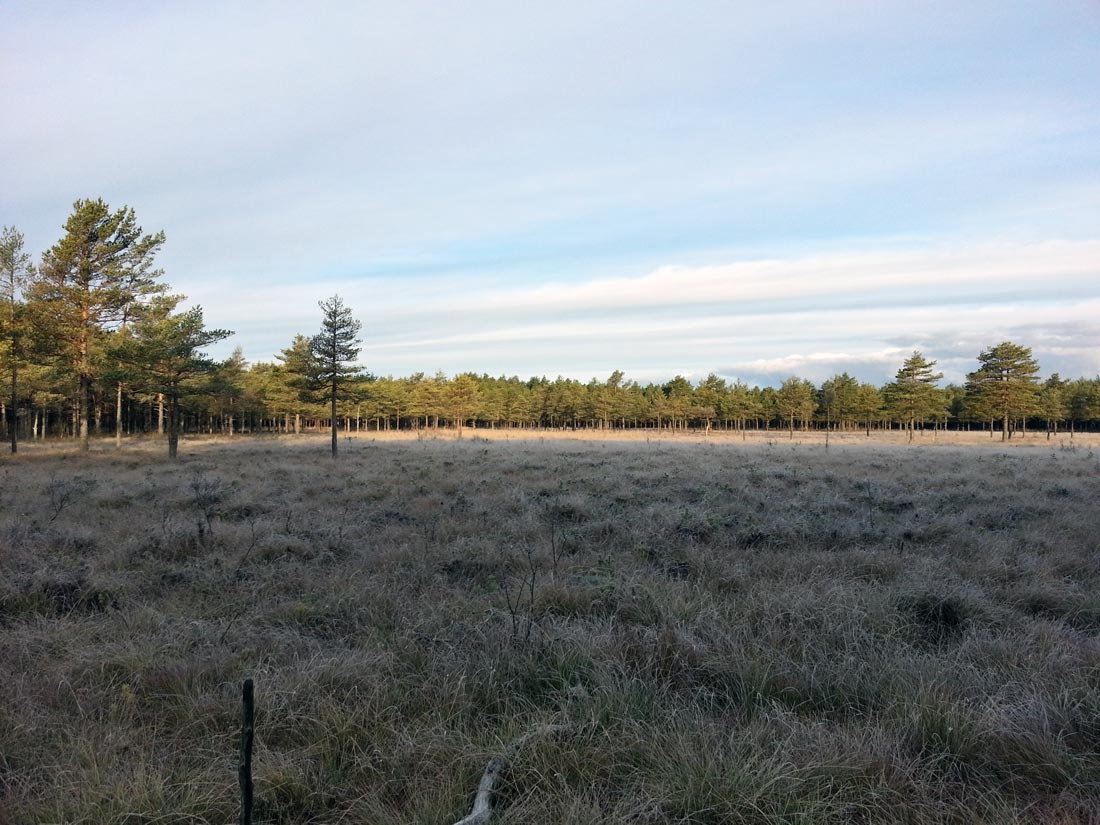 The next days we continued in the same way. We needed to go through most of the bog areas in the forest to find the best place for filming. The forest is big and there are so many different bogs, both in size and looks.

The best place for filming has to be:

– A bog which not too small and not too big. If it’s too small there’s a chance that the moose just walks over it so fast that’s it’s impossible to get all the shots to create a scene. It can’t be too big either, it has to be the size that we can cover it from one end to the other with our lenses.

– It has to have good visibility in all directions

– It should not have too much threes but not too little either, otherwise we can’t hide anywhere.

– It has to be close to a place where moose are and frequently walks. they often use their own “moose-paths”

– There has to be a reason for them to go out on the open bog which they don’t usually do because of the danger of being spotted.

– The scenery has to look similar to the other sceneries in the film so you get the feeling that everything is shot at the same place.

Every time we happen to locate and spot a moose, the moose has failed in a way. If we would not been filmmakers but hunters it would have been turned to this more common supermarket moose.

After our first encounter with the young bulls we didn’t see a single moose anymore at that day. in the end we found a nice spot with good visibility and some moose paths. We sat down and waited for the moose while making some sunset timelapses. 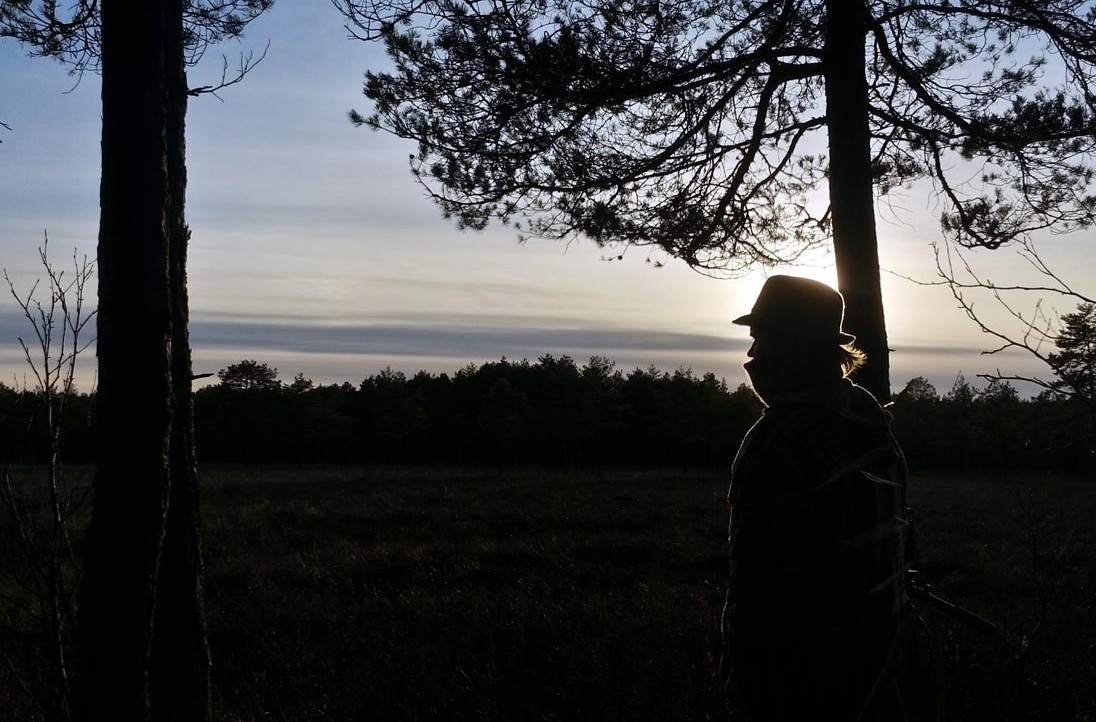 The next day was sunday, or let’s call it hunting day. Before the sunrise the forest was totally silent, there was not even any wind. Some kind of weird current in the air that morning. I saw a moose cow running for it’s life on the other side of the bog in the forest, it was so fast and far away in the forest that there was not a single chance to get anything on camera. just a minute after that a young bull appeared just about 50-60m from me. It was hiding in the threes on the border of the bog. It was moving very cautiously and looking around all the time. I really felt that it wanted to cross the open area but suddenly it stopped and turned back in the deep forest. No footage of this either. Everything went so fast and we started to realize something was wrong. Just a minute after these moose encounters we started to hear a lot of screaming and dog barking. The hunters had arrived. Suddenly the forest was filled with something 100 hunters and 50 cars. No wonder the animals are panicking. We gave up at this location and started to move to our car when we encountered the hunters. They seemed to be angry at us because we had parked our car “wrongly” in the forest. 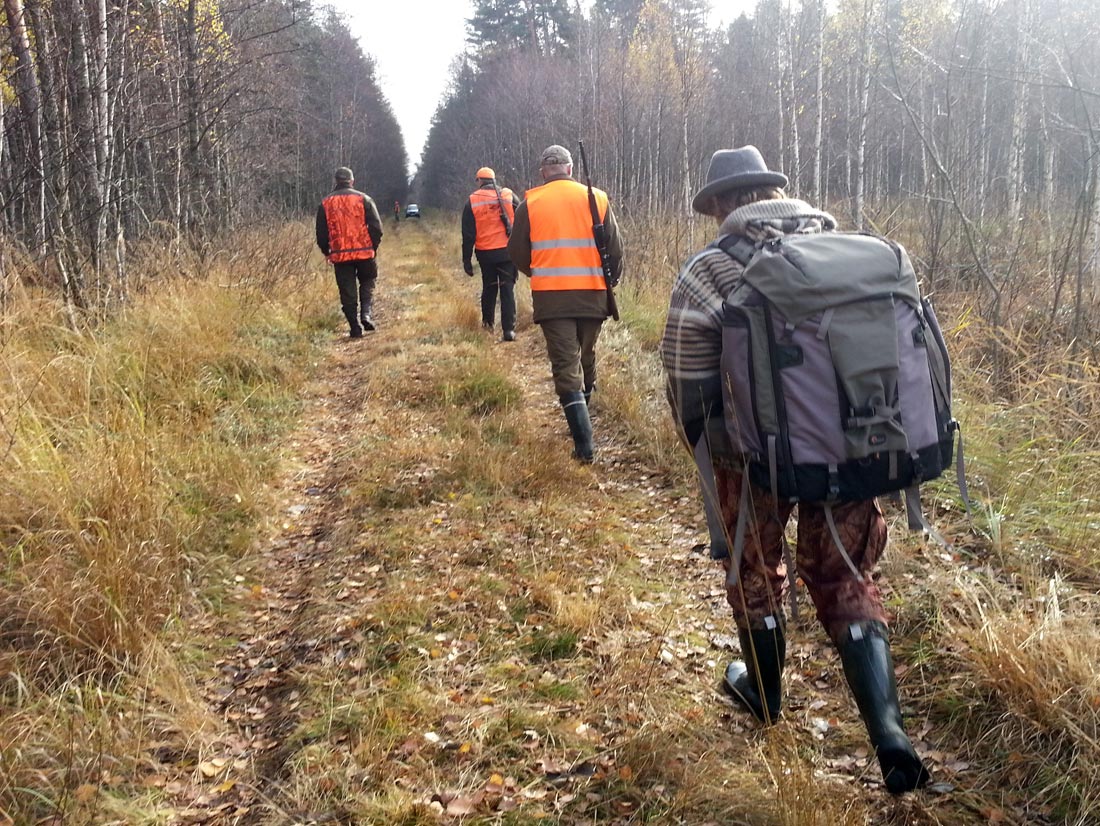